Following our extensive road trip in Scotland last September (2018), our “what next” discussions had mostly featured language like “for the next trip, let’s get off the road and do something a little slower paced”; and “hey what about something completely different, like Japan or a trip down under“.

So, it was almost completely out of left field when in early January of this year (2019), while enjoying my usual Saturday morning read of the weekend Globe & Mail, I turned to Mary and said “look at this ad for a European River Cruise!”.

To be clear, it’s not that we hadn’t discussed one in the past, and having been fortunate enough to have taken five previous cruises, we had no aversion to the idea of a cruise.  It’s just that we are notoriously spontaneous when it comes to travel, and up until this point. we had held off booking any river cruises, as they all featured 1-2 year lead times. What made this one different was that it featured a July 2019 departure, and as such a much shorter waiting time.

We deliberated on it for three days, and couldn’t really come up with an answer to the “why not” question, so we took the plunge and booked our spot on Viking’s Grand European Tour.  The trip would start in Budapest, Hungary on July 3rd, and finish in Amsterdam on July 17th.  During the

course of our discussions we decided to add an extra two days in Amsterdam to the end of the cruise –  a trip that would take us through five countries and include visits to Vienna and Cologne, two cities on our “love to see one day” list.

Viking’s website provides a good amount of information about each of the stops along the way, and the package included one outing or excursion in every port.  In addition there were one or two optional excursions that could either be booked in advance or once on-board, although in reading, we determined that a couple of them had limited availabilities.  We pre-booked one particular outing which I will tell you about in due course, and decided to let the rest of the trip unfold on a day-to-day basis.

We knew we were going to be sailing on the Longship “Lif”, a vessel built specifically for travel on the challenging riverways of Europe, but we had

no idea just how challenging those waters were until we happened upon a TV series on Discovery called “Mighty Cruise Ships”.   Somewhat remarkably we saw a promo for a one hour episode highlighting the exact trip we had booked and on March 27th, we sat down and watched it with much anticipation.  The ports that were featured and the views on the Danube, Main and Rhine Rivers were breath-taking, but we were also stunned to learn that this cruise would go through 68 locks and the captain would have to navigate under bridges that in some cases, left him with mere centimeters of clearance.  If you are interested and want to check out the episode and get a glimpse of what our trip was like,  it is available at http://www.discovery.ca/Shows/Mighty-Cruise-Ships.

The waiting time did seem to drag on at first, but by early June, we started getting really excited about the trip and the final 4 weeks before departure just flew by.

On Sunday June 30th, our son-in-law Ben and granddaughter Charlotte drove us to the airport for the first leg of our trip, a short stop-over in

Toronto for a Canada Day visit to Rogers Skydome and a baseball game between the Blue Jays and the Kansas City Royals.  We are both die-hard Jays fans and the past few seasons have been tough to watch, even for the most loyal of followers.  But, it had been more than 3 years since we had last attended a game in Toronto, and a stop-over on our way to Europe afforded us the perfect opportunity.

A little more than two weeks before our arrival, the Toronto Raptors had captivated Canadians from coast-to-coast by winning the NBA

Championship.  The city of Toronto was still basking in the afterglow of that win while at the same time fans were holding their breath waiting to find out if Kawhi Leonard was going to re-sign with the team. Everywhere we went there were celebratory signs and no surprise, Scotiabank arena, home of the Raptors and the Leafs featured one of the biggest.

We walked the city for a few hours before the ball-game and as luck would have it, July 1st turned out to be one of the hottest days of the entire year (up to that point)., with temperatures hovering near 30 degrees celsius.  The roof was open at skydome and we knew we’d need to be extra careful as far as exposure to the sun was concerned.  Last thing we needed was a sunburn before our real holiday even started.

It was a great day at the ball-park made even better by an 11-4 victory served up by the Blue Jays.  We felt very proud to witness the pageantry and celebration of Canada Day and despite having to leave our seats on three different occasions for the shady confines of the concourse, we had a great day. 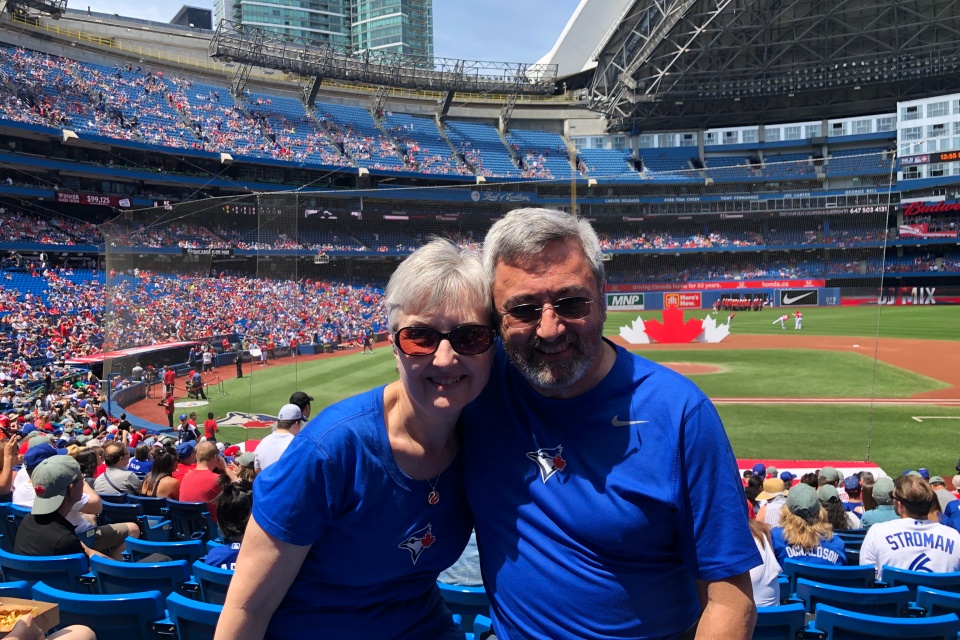