First it was paper napkins and plastic cutlery.  Next it was small packages of honey, and miniature bottles of jam and marmalade. From there it grew into the odd piece of fruit or cookie.  I watched in growing horror as right before my eyes, Mary was turning into a Kleptomaniac.  I did everything I could to help her.  I told her stories about Winona Ryder, Britney Spears and Lindsay Lohan and their shoplifting exploits.  I even offered to carry her purse for her so she wouldn’t have a place to put her stolen goods.  But alas it was no good.  Word got out, the police were onto her, and then……

All right, maybe it didn’t quite happen that way, although Mary has become pretty adept at stuffing her purse with Splenda packages and teabags for my ongoing use, during our time on the road.

The picture of Mary above was taken at the Phoenix Police Museum where we paid a visit one afternoon, and were given a delightful personal tour by a former police officer, who in his retirement had become the curator, caretaker, tour guide, and official greeter of the museum.

The day we arrived happened to coincide with a national conference of police officers that were meeting in Phoenix.  To celebrate the event and welcome the out-of-towners, three former police vehicles were parked outside the front door of the museum. 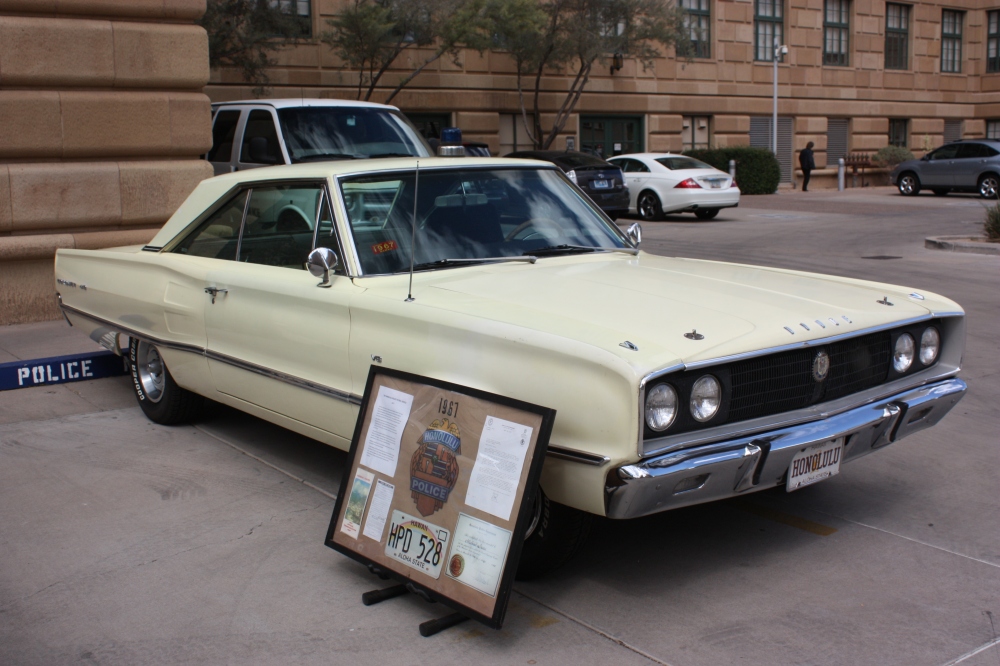 The one below, a 1967 Ford Custom, was of particular interest to me, and put a smile on my face, as my very first car was a 1968 aqua-coloured Ford Custom, a reconditioned former police car that my dad had purchased at an auction.  Man that thing could go like stink…..

Keeping these three veterans company was one of the current vehicles in use.

When we first walked in the door, we were told about Henry Garfias, who in 1981, was the first City Marshall elected by local residents, and he served 6 years as the primary law officer for the city of Phoenix.  The museum had a replica of the one room/one cell jail house that Garfias operated out of, as well as a replica of a “hitching post”, which was in fact an ankle shackle, where prisoners could be held if the cell was full.

In the early 1900’s, the PPD used Old Nelly the horse to pull the patrol wagon for the officers.  Most patrolling however was done on foot.  Nelly gradually gave way to the automobile, and here is one of the early vehicles employed by the force.

Call Boxes were used to notify an officer that headquarters wanted him, and the call boxes were supplemented by a system of horns and flashing lights.  Very subtle.

Jeannette Reed, the first female police officer in Phoenix joined the force in 1951 after answering an ad in the paper.  She had to put on 5 pounds to make the minimum weight of 125, before writing her initial exams.  She did all this without telling her husband.  She faced a number of challenges in the early days, including ridicule and lack of acceptance from the male police officers, struggles with the weight of the “gear” she had to carry and be prepared to use, and worst of all, the requirement to wear heavy hosiery in one of the warmest climates in the United States.  A full showcase is dedicated to her ground-breaking time and efforts on the force.

In the late evening hours of March 3rd, 1963 a young Phoenix woman was kidnapped, brutally raped and robbed while walking from a bus stop. 10 days later, on March 13th, 1963, Ernesto Arturo Miranda was arrested by Phoenix Police for the assault. These events set in motion a series of court hearings which resulted in a United States Supreme Court decision that would forever identify the relationship between law enforcement and those suspected of crimes not only in the United States but in many
countries around the world!  The reading of the Miranda Rights, also referred to as the Miranda Warnings.

While in custody of police, Miranda — who had a record for armed robbery, attempted rape, assault and burglary — signed a written confession to the armed robbery. He also confessed to kidnapping and raping an 18-year-old girl 11 days prior to the robbery. Miranda was convicted of the armed robbery, but his attorneys appealed the case on the grounds that Miranda did not understand that he had the right against self-incrimination. When the Supreme Court made its landmark Miranda ruling in 1966, Ernesto Miranda’s conviction was overturned. Prosecutors later retried the case, using evidence other than his confession, and he was convicted again. Miranda served 11 years in prison and was paroled in 1972.

There is a full display of the history of his arrest, the court proceedings that led to the supreme court decision.

At the age 34, Ernesto Miranda met a somewhat ironic end to his life, when he was stabbed and killed in a 1976 bar fight. A suspect was arrested in Miranda’s stabbing, but he exercised his right to remain silent.

He was released without ever being charged.

Over the years, the transportation assets of the PPD have expanded beyond the automobile (always “made in America” carlines like Dodge, Ford, Chrysler, and Mercury), to include various different types of motorcycles;

And in 1974, the first helicopter was added to their line-up of options, giving them “eyes in the sky” for the first time.

As we made our way through the museum with our personal guide by our side, we got to look at a number of fascinating displays filled with archival photographs, and various tools of the trade through the years.  Here are a few of the showcases we looked at;

As we worked our way through our list of things to see and do in the Phoenix area, we visited a number of attractions that met expectations, a couple that exceeded expectations and blew us away, a few that made us wonder who got paid on the side to say nice things, and some genuinely wonderful surprises.  Our visit to the Phoenix Police Museum falls into the latter.  We knew it was a small venue and we had viewed it as a “maybe do” if we needed to kill time before going to see a ball-game one afternoon.

There is no doubt that the retired former police officer, turned tour guide, had a lot to do with our positive experience, but the museum itself was well-laid out, full of interesting exhibits, and there were a number of hands-on, fun things we were able to do.  Definitely worth the hour we spent onsite.