Before setting out on this 2014 road trip, I looked out my well-travelled copy of “Passport To Your National Parks”, a book I have carried with me on several trips to the United States dating back to 2003.  It contains commemorative date stamps of visits we’ve made to places like the Golden Gate Bridge, the Statue of Liberty, Hoover Dam, The Lincoln Memorial, the Washington Monument, and on, and on, and on.

I wrote down the names of the 10 or 11 states we would most likely be visiting, and then made a list of the various National Monuments, Historical Landmarks, State Parks, and National Memorials that we might encounter during our travels.

One of the things that leapt off the page right away was the fact that there were a significant number of historical sites and ruins in Arizona relating to various ancestral peoples that had settled in the Sonoran Desert, long before any European explorers first arrived in the United States (phew long sentence there, sorry about that).  I’d like to tell you about four of the historical sites that we saw.

As I alluded to in an earlier post, the first one we visited was Montezuma Castle on our way to our Scottsdale condo on March 15th.

It is sheltered within a cave high on a limestone cliff overlooking Beaver Creek in the Verde Valley, and this five-story, twenty-room pueblo was once home to the prehistoric Sinagua people.  Some time around 1150 AD, the Southern Sinagua began building these large pueblos, often on hilltops or in cliff alcoves.  Montezuma Castle reached it’s peak size some time in the 1300’s and was occupied for another century.  Suddenly and without any reason that historians have been able to ascertain, these cliff-dwellers migrated away from their pueblos in the early 1400’s, leaving behind the remains of a remarkable culture.  Montezuma Castle is 100 feet above the valley but there are also ruins at the base of the cliff indicating that there was more to the settlement than just the structure built high up into the mountainside.

In addition to what they built, they made great use of natural holes (caves) in the side of the cliffs for storage.  The picture below gives you an example of what one of those holes looked like, and there were many of them pock-marking the cliff walls.  This one captured my attention because if you look closely at the top of the cave, you will see some very large honeycombs.

It seems that the bees of 2014 are just as innovative at making use of these caves as the Sinagua were in their day.

Until the early 1950’s, the public had access to Montezuma’s castle via a series of ladders, but (sadly) due to heavy looting and vandalism, very few original artifacts remain, and the integrity of the structure itself was becoming threatened .  The public is no longer allowed access to the site in an effort to try and protect what is left of one of the best-preserved cliff-dwellings in North America.

In 1953, a park ranger built a model of what the Pueblo probably looked like at it’s peak in the mid 1300’s.  That model is still there today, 61 years later, and I can only marvel at what the actual cliff-dwelling must have looked like in it’s day.

The next site that we visited is called Tuzigoot, and it is located roughly 23 miles northeast of Montezuma’s Castle.  The picture below is the only one I was able to take as we stopped by at the end of a day’s worth of travels, and the facility had closed about 20 minutes before we got there – darn it!

Tuzigoot is the remnant of a Southern Sinaqua village built between 1000 and 1400 and it crowns the summit of a long ridge rising to about 120 feet above the Verde Valley. You can see from the file picture below that there is much more to the ruins than can be seen from the roadside where I took my photo.

The original pueblo at Tuzigoot was two stories high in places, with 87 ground-floor rooms.  There were few exterior doors and entry was by ladders through roof openings.  It is estimated that as many as 200 people lived their at its’ peak.

There is another site in the same general area as Montezuma’s Castle and Tuzigoot – Montezuma Well, but we did not manage to make it there on this trip to Arizona.

The next site we visited was the Tonto National Monument near the Roosevelt Dam, and it was pretty darned spectacular (so was the Dam, but that will be the subject of another blog-post).

To get to the cliff-dwelling, we had to hike a 1/2 mile up the side of the cliff, a 350 foot climb which is the equivalent of a 45 story building.  The view looking out at Theodore Roosevelt Lake from the top was absolutely stunning.

Built in the early 1300’s, this well-preserved building represents one of the last Salado cliff dwellings in the Southwest United States.  It was occupied year round, and since it was an east-facing cave it provided morning sun as well as afternoon shade.  You can see from these next two pictures how they inserted large beams from sycamore trees into vertical walls and then created floors for the multiple story dwelling out of a hard plaster-like substance.

Some of the walls were clearly fire-blackened indicating that these homes would have been quite dark and smoky.  Likely a large amount of time was spent in open areas, and on roof-tops.

This cliff dwelling was occupied for nearly 100 years, but by 1425, many of the prehistoric people living in the Tonto Basin had migrated to other areas.

The last site we visited was the Casa Grande Ruins, roughly one hour south of Phoenix, near Coolidge.  This site was equally spectacular but also very different from the previous three as these remains were on the desert floor.

These ruins are associated with the Ancestral People of the Sonoran Desert, and the  building in the picture below, is the largest physical structure that has been found in any archaeological dig in North America, at four stories high and 60 feet long. The ancestral people are called the Hohokam by archeologists and they were brilliant as it relates to what they built, given how meagre their resources were.

They produced a sticky mud from a substance they found a few feet below the ground, and it was used as a multi-purpose construction material.  They used it to build walls, seal roofs, and for plastering walls and floors.

At one time, a 7-foot high wall surrounded the entire compound which contained  houses, work areas, courtyards and storage rooms.  The Casa Grande Ruins are four times larger than any other compound that has been found, and it contains the one-of-a-kind building at it’s center – the Casa Grande.

Like the people from the ruins we visited in the northern part of the state, the Hohokam society suffered from a decline from which they never recovered, and by the late 1300’s, the Casa Grande compound was gradually abandoned.

The ruins lay “undiscovered” until 1694 when a Jesuit missionary visited and documented the remains.  He is the one that gave Casa Grande its name.  Its discovery made it a famous desert landmark but that fame turned out to be a mixed blessing.  By the 1800’s, it was commonplace for people to scratch names, initials, and designs into the ancient plaster, and worse still, remove pieces as “collector’s items”. 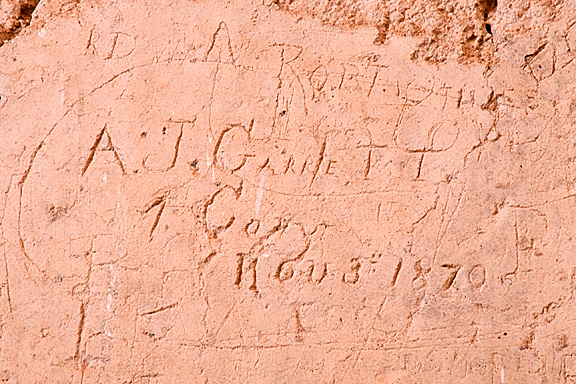 Preservation of the site started in 1889 through an act of congress, and badly eroded wall foundations were braced with wooden beams and metal rods.  In 1903, a small roof was placed over the Casa Grande to protect it from the sun, and it was replaced in 1932 with the large roof that is visible in my pictures.

Once again, we were left to marvel at the ingenuity, resourcefulness and skilled labour of people that had very little to work with except what the land itself yielded.

This particular set of ruins absolutely blew us away.